Sign in
Recommend John's obituary to your friends
Send Flowers 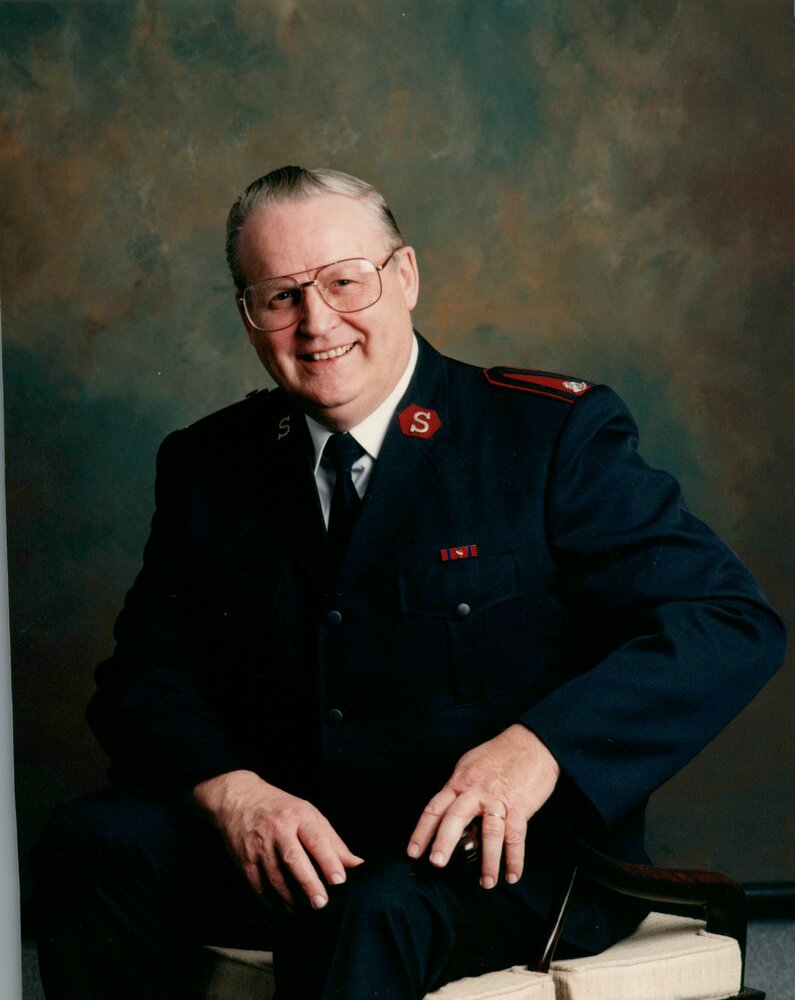 Please share a memory of John to include in a keepsake book for family and friends.
View Tribute Book

Peacefully, surrounded by his family, Major John Walter Gordon Gerard (R) was Promoted to Glory on December 10, 2022 at the age of 89.  The eldest of five children of Salvation Army officer parents, John was born in Pictou, Nova Scotia and later moved with his family to Saskatchewan.

Out of Vancouver Temple, he entered the training college in St.John’s, NL as the first mainlander to do so. He was commissioned in 1959 as part of the Pioneer Session and during his time there he met the love of his life, Lorraine Rideout.  They were married two years later and shortly thereafter took up their first joint appointment as they opened the work of the Salvation Army in Labrador City. Over the years they continued to serve the Lord together in various ministry appointments across the country including Newfoundland, Ontario and British Columbia. Fourteen of those years were spent at THQ in finance and property.  Being the Administrator of the Men’s Social Centre in Thunder Bay was one of his favourite appointments. John also had a special interest in multi-cultural ministries and began a Spanish work in Windsor, ON.  He entered honourable retirement from Toronto DHQ Public Relations in 1995 after almost four decades of active service.

John was loved immensely by his family and friends.  He leaves behind his wife of 61 years, Lorraine; his five children and their families, Joy, David, Glenn, Lisa (Kevin), Charles (Dara-Lynn); his 14 grandchildren, Daniel (Brittany), Kathleen, Melissa, Tricia (Seulah), Rachel (Lorne), Emma (Ben), Jacob, Jonathan, Drew, Alexandria (Marcus), Nolan (Brooke), Ethan, Sarah and Julianna; his great-grandchildren Payton, Paige and Margo; his siblings Nancy and Ruth (Alan) and many members of his extended family. Sadly, the day after John died, his son-in-law, Charlie (Joy) was also Promoted to Glory. He was predeceased by his parents, Walter and Marie, his siblings Frances and Bill, as well as his brother-in-law, Alvery.

All who knew John, knew that his first love was for his Lord and Saviour, Jesus Christ and that his greatest desire was to share that love with everyone with whom he came into contact. He is now in the presence of God and we are secure in the knowledge that we will one day be reunited with him in Heaven.

He will wipe every tear from their eyes. There will be no more death or mourning or crying or pain, for the old order of things has passed away.” Revelation 21:4

Visitation will be held at the Salvation Army Oshawa Temple on Saturday December 17th from 12:00pm -2:00pm. A Funeral Service will follow at 2:00pm.  A private family interment will be held at Mount Pleasant Cemetery in Toronto on Monday December 19th at 2:00pm.  If desired, memorial donations to the Salvation Army Oshawa Temple would be appreciated.

For those that are unable to attend the Funeral Service in person, we invite you to join via Livestream by clicking this link.