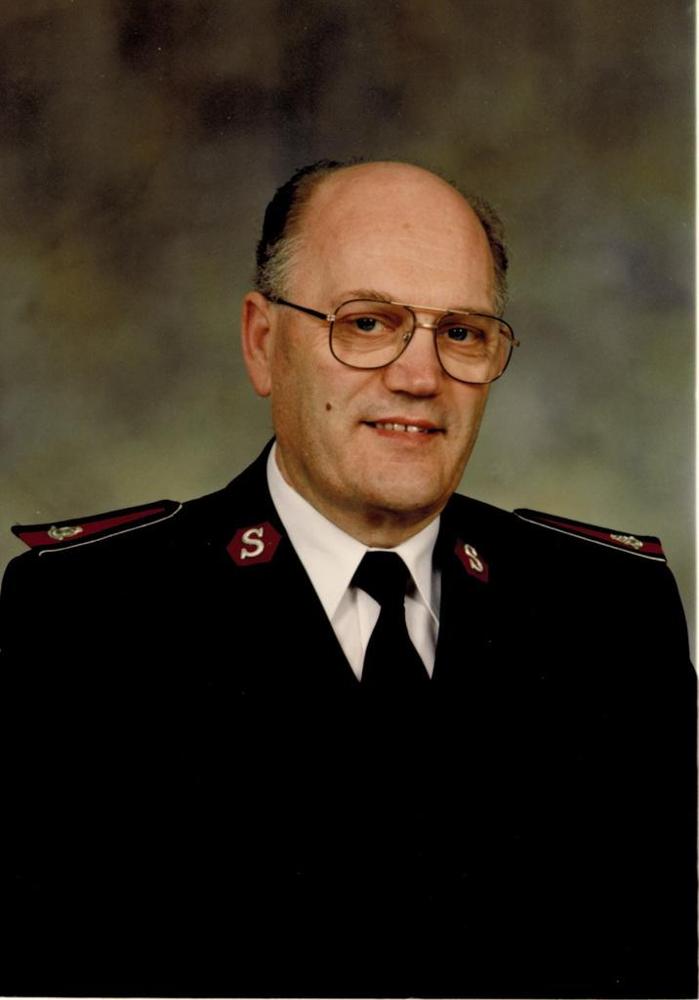 Lieut.-Colonel Boyde R. Goulding passed away at Rouge Valley Ajax and Pickering Hospital surrounded by his family following a valiant battle with heart disease. One of six children, Boyde was born June 14, 1937, in Garnish, N.L., to Salvation Army officer parents, Brigadier and Mrs. Domino and Elitena Goulding. He entered the teaching profession prior to following in his parents' footsteps to become a Salvation Army officer and was commissioned in 1958 as a cadet in the Courageous Session. His first appointment with The Salvation Army was to Springdale, N.L., where he served as youth officer and school principal. A two-year appointment in Clarenville, N.L., in a similar position, preceded his marriage to the love of his life, then Captain Marie Starkes, on January 4, 1963. Together they served as the corps officers in communities throughout Newfoundland and Labrador, including Baie Verte, Labrador City, Comfort Cove/Newstead, Dildo/New Harbour and Gambo, before moving to Glace Bay, N.S. Beginning in 1976, Boyde served for four years as the divisional youth secretary in the then Newfoundland East Division, during which time he was instrumental in the establishment of The Salvation Army's Camp Starrigan. In 1980, together with Marie, he became the corps officer of North Toronto Citadel, where he ministered for three years before returning to the then Newfoundland East Division as the divisional secretary. In 1987, Boyde was appointed as the divisional commander in the then Ontario North Division where he served until 1992 when he assumed the role of property secretary at The Salvation Army Canada and Bermuda Territorial Headquarters in Toronto. In 1996, Boyde became the divisional commander in the then Newfoundland West and Labrador Division and then in 1998, held the same position in the Newfoundland East Division. Returning to the position of property secretary in 1999, Boyde entered honourable retirement in 2000. A man with a strong faith in Jesus Christ, Boyde was known as a gifted preacher, leader and encourager to those who came under his sphere of influence. He is lovingly remembered by his wife of 50 years, Lieut.-Colonel Marie Goulding; his three daughters and their families, Pauline and Hartley Goldenthal and son, Benjamin, Pamela and Robert Richardson and son, Nathan, Beverly and Timothy Cooey and son, Liam; brothers Elmo Goulding, Albert and Emma Goulding; sister, Grace and Hubert Smith; nieces, nephews and family members; a large circle of friends. Friends may visit with the Goulding family on Thursday, June 13, 2013, from 4pm - 8pm at the DeStefano Funeral Home, 1289 Keith Ross Drive, Oshawa, ON, (Taunton Road, one block east of Thornton Road) and then on Friday, June 14, 2013, from 11am - 12:30pm at the Salvation Army Oshawa Temple, 570 Thornton Road North, Oshawa, ON. The Funeral Service will be held on Friday, June 14, 2013, at 1:00pm at the Salvation Army Oshawa Temple. Interment to follow at Pine Ridge Memorial Gardens. Memorial Donations may be made to the charity of your choice. Online condolences may be made at: www.destefanofuneralhomes.ca
Thursday
13
June

Share Your Memory of
Boyde
Upload Your Memory View All Memories
Be the first to upload a memory!
Share A Memory
Send Flowers