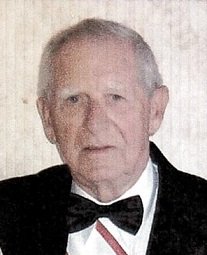 Gerard Basil was born January 9th, 1932 in Toronto, the youngest of eight children born to Margaret and James Burns.

Gerry, as he was known by most, attended St. Michael’s College School, where he found his first love – hockey. He met his wife, Joan, at a school dance at Bowmore Road School, and the two were married on July 18, 1953. Throughout most of their 65-year marriage they lived in Toronto and Scarborough, before moving to Oshawa in 2000 to enjoy their retirement.

When Gerry wasn’t following the Toronto Maple Leafs, you could find him coaching and cheering for his children, grandchildren and great-grandchildren in various sporting activities, volunteering in his community with the Knights of Columbus or Meals on Wheels, golfing at Annandale Golf Course or Oshawa Airport, or spending time with his beloved family and many friends.

Visitation will be held at the DeStefano Funeral Home, 1289 Keith Ross Drive, Oshawa (south side of Taunton Road, east of Thornton Road by the Oshawa Airport)905-440-3595  on Thursday, January 11th from 2:00pm to 4:00pm and 7:00pm to 9:00pm.  A Funeral Mass to Celebrate Gerard’s life will be held at St. Joseph the Worker Parish on Friday, January 12th  at 11:00am.  Interment Resurrection Catholic Cemetery. If desired, donations to the Knights of Columbus would be appreciated.   Memories may be shared at www.destefanofuneralhomes.ca